Courageous, full of spirit, with a fun loving attitude. A unique feature is a downfaced, egg-shaped head. Irrespective of size dogs should look masculine and bitches feminine.

Of even temperament and amenable to discipline. Although obstinate is particularly good with people.

Head long, strong and deep right to end of muzzle, but not coarse. Viewed from front egg-shaped and completely filled, its surface free from hollows or indentations. Top of skull almost flat from ear to ear. Profile curves gently downwards from top of skull to tip of nose which should be black and bent downwards at tip. Nostrils well developed and under-jaw deep and strong.

Appearing narrow and triangular, obliquely placed, black or as dark brown as possible so as to appear almost black, and with a piercing glint. Distance from tip of nose to eyes perceptibly greater than that from eyes to top of skull. Blue or partly blue undesirable. 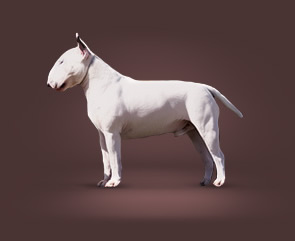 Small, thin and placed close together. Dog should be able to hold them stiffly erect, when they point straight upwards

Shoulders strong and muscular without loading. Shoulder blades wide, flat and held closely to chest wall and have a very pronounced backward slope of front edge from bottom to top, forming almost a right angle with upper arm. Elbows held straight and strong, pasterns upright. Forelegs have strongest type of round, quality bone, dog should stand solidly upon them and they should be perfectly parallel. In mature dogs length of foreleg should be approximately equal to depth of chest

Body well rounded with marked spring of rib and great depth from withers to brisket, so that latter nearer ground than belly. Back short, strong with backline behind withers level, arching or roaching slightly over broad, well muscled loins. Underline from brisket to belly forms a graceful upward curve. Chest broad when viewed from front.

Hindlegs in parallel when viewed from behind. Thighs muscular and second thighs well developed. Stifle joint well bent and hock well angulated with bone to foot short and strong.

Round and compact with well arched toes.

Short, set on low and carried horizontally. Thick at root, it tapers to a fine point.

When moving appears well knit, smoothly covering ground with free, easy strides and with a typical jaunty air. When trotting, movement parallel, front and back, only converging towards centre line at faster speeds, forelegs reaching out well and hindlegs moving smoothly at hip, flexing well at stifle and hock, with great thrust.

Short, flat, even and harsh to touch with a fine gloss. Skin fitting dog tightly. A soft textured undercoat may be present in winter.

Height should not exceed 35.5 cms (14ins). There should be an impression of substance to size of dog. There is no weight limit. Dog should at all times be balanced.

Any departure from the foregoing points should be considered a fault and the seriousness with which the fault should be regarded should be in exact proportion to its degree and its effect upon the health and welfare of the dog and on the dog’s ability to perform its traditional work.

Male animals should have two apparently normal testicles fully descended into the scrotum.